Exotic plants get a reputation for being difficult to grow, especially for beginner gardeners. And it’s usually justified, as most species are very particular about temperature and soil or require precise trimming to promote proper development. Some tropical plants like the Calathea ornata can only be efficiently grown in a greenhouse because of how specific their needs are.

Luckily, one of the most beautiful flowers in the world is actually not that difficult to raise. The Strelitzia (commonly known as the Bird of Paradise plant) is a long-lived specimen that gets its name from its flowers resembling the plumage of an actual bird of paradise. A special variant with yellow flowers called “Mandela’s Gold” can also be found, but is far less common (before it was commercially released, botanists had problems getting seeds from yellow plants to produce yellow flowers themselves). With large, oval-shaped leaves and an average height of over 6 feet (and that’s just the more commonly used variant – the less common Strelitzia Nicolai grows to 6 metres tall and is impractical to raise for anyone who doesn’t own a huge enough garden to support it as it cannot be pruned), this South African native has a striking appearance even outside of its flowering period.

The Strelitzia name takes its roots (no pun intended) from the family name of botanist and English Queen Charlotte of Mecklenburg-Strelitz, who played a major part in developing this plant in the Royal Kew Gardens in 1773. The plant was also declared the official flower of Los Angeles, California

Guide To Growing A Bird of Paradise Plant
How’s the Weather Down There?
What Should You Provide for Your Strelitzia?
Soil
Light Requirements
Temperature
Humidity
Watering
Fertilization
Grooming and Re-Potting
Dealing With Pests
Propagating the Strelitzia
Raising a bird of paradise plant is incredibly rewarding

If you enjoyed this post and would like to keep it close to you at any time, just save THIS PIN to your Gardening Tips or Flower board

How’s the Weather Down There?

In order to understand the specifics of what the bird of paradise plant wants, we must consider its natural habitat. South Africa’s weather is characterized by summer rains (it instead rains in the winter in places like Cape Town due to its Mediterranean climate), with the eastern region receiving most of that rainfall.

The average maximum daily temperature in the Highveld region (the eastern plateau) is 26 °C, which is considerably more pleasant than that of the north-western deserts. This is caused by the increased elevation and explains why the bird of paradise plant thrives in average home temperatures as a houseplant.

What Should You Provide for Your Strelitzia? 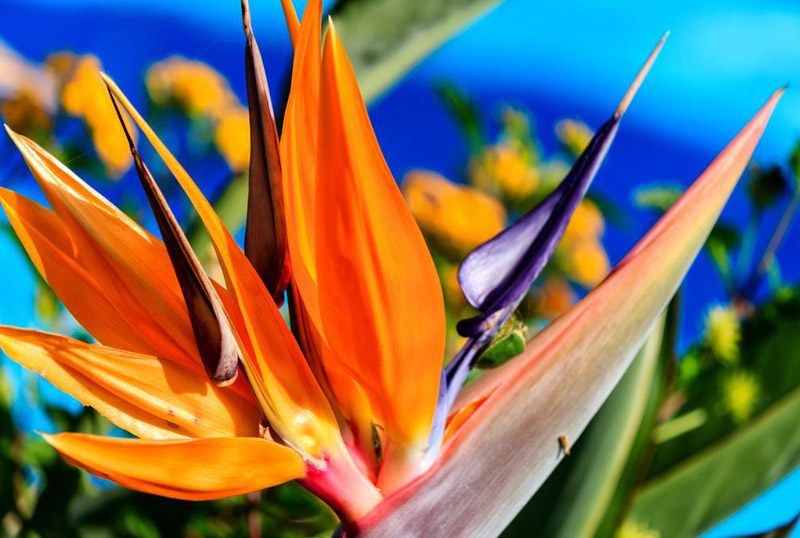 A standard potting soil is all you need, as this plant isn’t very picky.

The bird of paradise requires indirect but bright sunlight year-round. Exposing it to direct sunlight risks damaging the flowers, especially in the summer. If the temperature is ideal (see below), the plant should be placed in partial shade. While the Strelitzia can tolerate dark environments, keeping it there results in less frequent flowering and a wider shape. If you notice curled up leaves while the plant is young, it means it’s exposed to too much sunlight and should be moved to a more shaded area.

If you want to see frequent flowering, a temperature of 21°C-30°C is perfect. However, as shown above, this comes packaged with a couple of maintenance requirements. During winter, you may want to keep the temperature between 10°C and 15°C. This is done so the plant can rest after a growth period.

During summer, the air humidity in your home should be enough to sustain the strelitzia. If it isn’t, misting it serves as a way to simulate rainfall. This is especially useful during the winter.

The best approach to watering your bird of paradise is to water deeply and thoroughly, then let the entire pot drain out before repeating. The Strelitzia doesn’t handle overwatering very well, and you may notice brown leaf tips if you’re too liberal with your watering. If your plant starts growing yellow leaves on the outside, it’s a clear sign of underwatering, so adjust accordingly.

Fertilize every two weeks during warm seasons, and once per month during fall and winter. Keep in mind that more doesn’t equal better, however. Too much feeding has dangerous consequences!

Keep the leaves clean using a hand wipe. Make sure not to rip the leaves, as they’re very fragile (fragile enough to get torn by the wind). While the plant can tolerate minor leaf damage, it’s still risky. As the plant grows, you may spot brown/yellow leaves near the bottom.

At that point, it’s best to remove them, as otherwise, they take a long time to fall off naturally. Other than that, the bird of paradise doesn’t respond well to pruning, and you will have to adjust your garden/room to accommodate it properly.

Re-potting is fairly intuitive. In the winter (so outside of the main growth period), check whether the roots still have space to grow in the current pot. If not, switch to a larger one. If the plant has already grown to solid proportions, you may want to ask for help with the procedure. Don’t be surprised if growth slows down after re-potting. This is normal, as the plant has to spend energy on growing tap roots.

If you get pests on your bird of paradise, it’s most likely either mealy bugs or scales. Mealy bugs look like tiny clumps of cotton on the leaf joints (and everywhere else, potentially – including under the first layer of soil!), and can seemingly appear out of nowhere. This is because they can actually live a good amount of time without a host plant, so don’t be surprised to see them return. Scales function like plant leeches. They look like little brown bumps on the plant’s stems and don’t move.

Luckily, both of these have a very simple﻿ treatment using things you have at home. Dip a cotton swab in rubbing alcohol and directly touch the insects to kill them. This is the easy part.

The hard part is inspecting every part of the plant, the first layer of soil around the stem, the bottom of the pot and even surrounding plants for signs of further infestation. Be as thorough as you can to make sure you’re in the clear. And don’t be surprised if the pests return.

Strelitzia leaves are poisonous if ingested in large amounts by humans or their pets, causing nausea and vomiting. Make sure your plant is located somewhere your pets or children cannot easily get to it if you notice suspicious leaf damage. 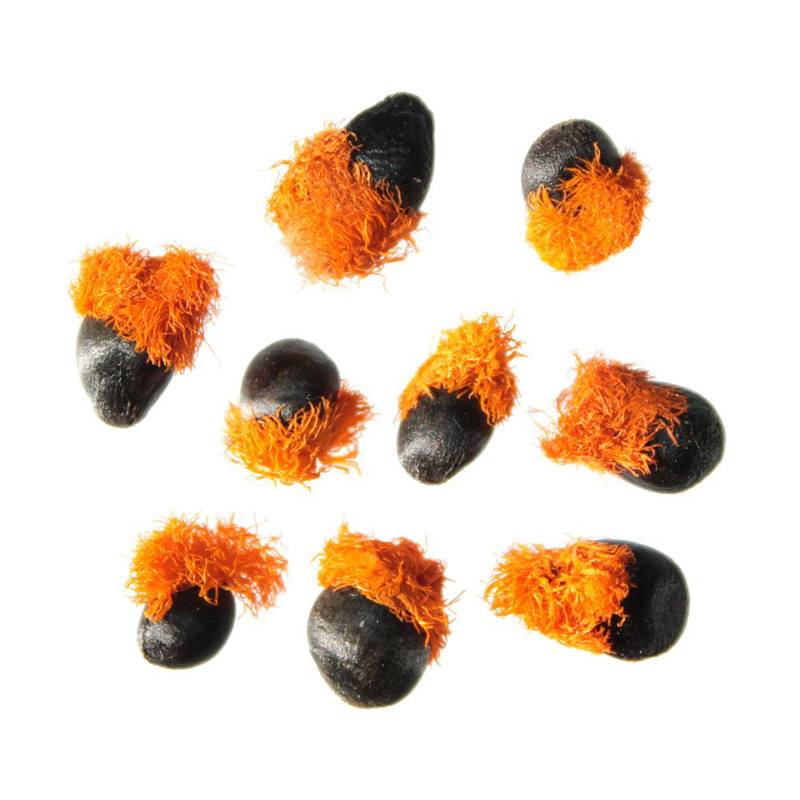 The most convenient way to grow new plants from a fully grown bird of paradise is through seeds. They’re black and have adorable tufts of hair growing out. Take that hair off and plant them half an inch deep in well-drained soil. Before planting, keep them soaked in room temperature water for a few days, changing the water each day. Make sure the soil stays moist and warm.

Alternatively, you can use division, which is riskier but produces quicker results. The next time you re-pot your plant, unravel the roots thoroughly then cut the middle part carefully with a sterilized knife to separate the two plants. Apply rooting hormone and don’t water for a few days to let the roots recover. Plant the new plant in a smaller pot than you just used, to encourage quicker blooming.

Raising a bird of paradise plant is incredibly rewarding

Both the plant and its flowers are long-lived, and you should expect to see blooming each year after it begins (anywhere from 3 to 6 years after planting). The plant does well in containers, and will usually steal attention from everything else in its surroundings. If you can grow it, your neighbors probably can too, so it makes a lovely gift for anyone who’s interested in houseplants as a hobby or simply likes great decorations and is willing to put in a little work for it.

There you have it, a full guide to growing this incredible flower in your home.

Let us know what you think about it, and don’t forget to share the article with your friends who adore the bird of paradise plant!

If you enjoyed this post and would like to keep it close to you at any time, just save THIS PIN to your Gardening Tips or Flower board 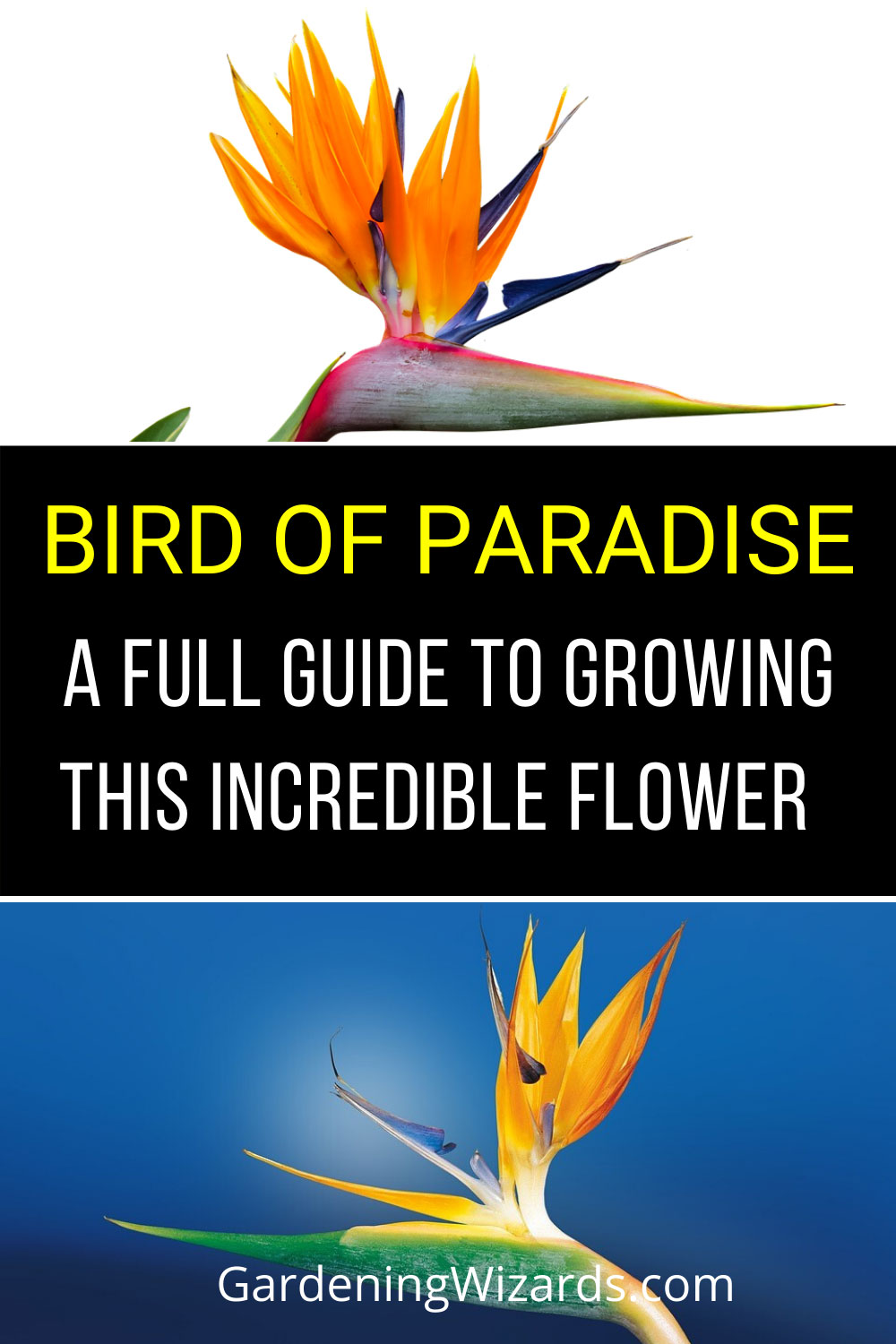 I’m Emily and after a ten year career as a journalist I have moved on to share my passion for gardening. While getting out in the garden is one of my favourite hobbies, and helps me de-stress after a long day in the office, I often found myself frustrated at not getting the results I wanted from my plants. Through blogging, I have uncovered the answer to lots of common problems and now I want to share my knowledge with other horticulture enthusiasts. Get in touch with me via: Pinterest, Twitter

[…] if it is possible. If you have cut down the tree recently, always bear in mind that you should plant another one instead. Trees are generally considered comfortable for maintaining and will also bring you […]

Getting the Best Zero Turn Mower – The Handy Gardener’s Way

The best LED grow lights to give you amazing plants

Modern Fireplace- An Opportunity to Add Comfort to Your Lives

Why You Should Prefer Plexiglass and Polycarbonates for Home Projects

Things to Consider when Choosing Outdoor Furniture for Garden and Patio

You can find out more about which cookies we are using or switch them off in settings.

This website uses cookies so that we can provide you with the best user experience possible. Cookie information is stored in your browser and performs functions such as recognising you when you return to our website and helping our team to understand which sections of the website you find most interesting and useful.

Strictly Necessary Cookie should be enabled at all times so that we can save your preferences for cookie settings.

If you disable this cookie, we will not be able to save your preferences. This means that every time you visit this website you will need to enable or disable cookies again.